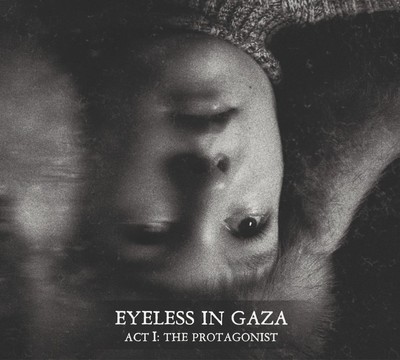 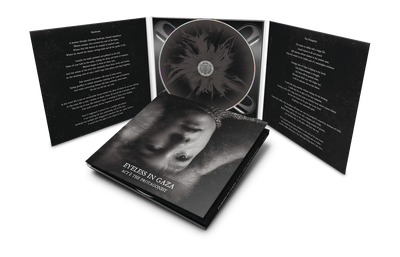 The debut album by Eyeless in Gaza, a band from Armenia, presents a fusion of different styles and gives a fresh look at the genre. A harmonic combination of classical acoustic guitar, academic choral chants, and dark ambient interludes, as well as motifs of the epic funeral doom metal and black doom metal with variable vocals, gives birth to a real epic canvas filled with magic that tells about a personal experience, which can be expressed exclusively by the language of music.
Act I: The Protagonist is an abstract conceptual album, where each track is a stage of personal experience, existential thoughts about destruction as an idea of a new beginning. This is a dreamy and tragic monologue about deep feelings of regret and humility that are melting within us.
The album comes as a limited six-panel digipack.

Armenian multi instrumentalist Franklin Avetiyan decided to channel his creative side into atmospheric doom under the name of Eyeless In Gaza and produced his first full length record, ‘Act I: The Protagonist’. It came out last year through Solitude Productions.

The title track is the longest on the record at 20.14 and is a journey through various emotions and styles. Tranquil acoustic guitars greet your ears for over 90 seconds until the progression begins. The atmosphere, calm and relaxing, is shattered at the 3.50 mark. Sounding like a tortured soul clawing its way out of a pit, Franklin’s vocals truly add the doom here. Blending the tender notes with heavy chuffing riffs, thudding drums and additional screams the tone is set. Or is it? As clean vocals break in and offer a tender side to the harshness. Half way through and the vibe changes again, excellent playing guides us forward as more harsh and rending vocals scratch and tear their way into your head. Leading us into the back half of this track is a growing unease within the music, tension being built and a more classic black metal vocal style giving a sense of intent and malice. Despite the grim middle this track concludes with an uplifting overture that fights and toils against the darker side and then like that we are done.

‘Maelstrom’ is a mere 14:01 long as it starts us off in a softer way. Clean vocals, clean playing; the only hint of doom is the weight of the drums and the bass notes ringing out for as long as possible. There is a definite lightness to this track, an almost respectful sense of playing, as though to play too hard would be rude. But then the landscape changes, grimness resumes, a purposeful doom march begins. Almost like an encroaching darkness this track gathers pace and creeps towards you with a shift in tone, even the quieter parts are less light, feeling more like someone waiting for the other shoe to drop. With those two tracks the first half of the album the latter two shift in approach. Both being instrumental and a good deal shorter than those mentioned above. ‘Mournful Unconcern’, a great track name indeed, starts off with a very dark feel and this is added to with what I can best describe as the sounds you would expect out of a musical jewellery box. The acoustic guitar playing is a marvelous counterpoint to the classically heavy crashing drums. With savvy use of the electric guitar and distortion full doom is achieved and it is unnerving, driving and most excellent. Bringing us to a close is the brief but never the less delightful ‘Madrigal’, making me think of Madeline Madrigal from Dredd this track has none of the hate, spite and evil of that character, this is instead a stunning bit of acoustic and mellow playing that rounds out this album on a wonderfully calm way.

For a man of such youth, Franklin is only recently 21, he has shown great depth and understanding of doom, knowing that the power of doom is often in doing nothing yet has pushed the boundaries a little with the quieter moments, almost lifting it into something else. I would be very keen to hear more recorded under the Eyeless in Gaza name. In the meantime check this out. It is grand.

Eyeless in Gaza are a doom/death act and it’s probably best to describe them with a song by song as there are only four here.

The first track here is called “The Protagonist” and it is quite lengthy. I would even go to say that it is EP length. The harsh vocals aren’t perfect, but the clean vocals and guitar melodies on the album both deliver in spades. I would have just hired a deep growler, rather than sounding like angry Gollum. The synth section I found to be great as well, rather unexpected. Other than that, the piece features a lot of acoustic melody which gives it a worldly feel.

“Maelstrom” comes next, following up on the acoustics as clean vocal harmonies once again win the day. The most interesting part of this track however, is when it goes ambient. The harsh vocals sound a bit better when the song unexpectedly bursts into a much heavier section, replete with some memorable leads as well. Ah, there’s a deep voiced growler in the band right there. Save your vocals man, you are killing your throat and I can hear it. Let that guy do the growling – his voice sounds like a mineshaft and it goes deep down. The frontman continues his angry Gollum approach, (which is I guess an attempt at black metal, because I’m getting those vibes) as the song continues into a gloomy atmosphere later peppered with acoustics and pounding drums, which are a bit sparingly used here. After that, the whole thing goes into a sort of dreamy, acoustic ambient. It sounds kind of like fairyland.

“Mournful Unconcern” is an uncomfortable mix of doom and synth atmospheres, backed with acoustics and drumming that later reaches into full-on terror. The song sounded rather mysterious in the beginning, but now it’s kind of like the moment where the supernatural killer creature was discovered in Death Come True and you’re grabbing your chest as the thing just comes through the door when you expected it to be a police officer. Yeah, it’s that kind of what the fuck moment that really takes this song from mystery into terror and then finally what seems like an acceptance of death. “Madrigal” is just an acoustic piece to end the listen and I could honestly take it or leave it. It’s like the end credits of a movie in that respect.

Ultimately, while Act I: The Protagonist is not my favorite doom/death record, I do have to respect the large amount of work that has gone into the structure of it all. The disc is filled with twists and turns, where heavy death metal-influenced bouts come out of nowhere and sometimes without expectation the whole album goes right into synths. It is not necessarily a heavy record, though it is far from calm in certain moments. I think you’ll find a lot to look forward to in this mysterious release, where nothing is quite what it seems. You know, except for “Madrigal” which kind of killed the vibe, but that is as I noted, a form of end credits.

Eyeless in Gaza is a one-man Armenian project created by multi-instrumentalist Franklin Avetisyan with the goal of creating a gloomy funerary atmosphere in music. The debut work combines the various elements bringing a fresh look to the doom genre. Here we can hear symphonic and ambient elements, acoustic/classic guitar passages. Academic choral chants are superimposed on the main layer of the epic funeral doom, black doom. A variety of vocals also contributes to the monumental canvas.

The tragic and dreamy monologue about the bitter and deepest feeling of regret and humility inside us opens with the longest composition “The Protagonist”. There are more than 20 minutes of funerary philosophy at an unhurried musical pace. Extreme vocals tear apart thin tissue in the middle of a calm instrumental like a knife stroke. And it continues to "run with scissors" throughout the album. Pretty nice clean vocals softens the beat enveloping the soul like a balm. The clean vocals on the album belongs to Areg Mkhoyan.

At certain points you don’t even notice how you get into a trance state. How you lose a particle of your former consciousness at the moment of listening. And at such moments you gain some new experience that is incomparable before.

The album is quite personal which not only the description confirms but it is felt from the material itself. It is endowed with its own special magic passing through an each track. The each composition here is as a stage in an existential narrative endowed with thoughts of destruction as a new beginning.

The second composition of the album is also quite long which is quite common for the genre. "Maelstrom" brings an even more touching beginning and the text eats into the brain with bleeding wounds. And acoustic motives again immerse the listener in a trance. A heavy layer with extreme voices and overloaded guitars is pulled out of a stupor. The melodic line perfectly complements the main sad motive.

The instrumental "Mournful Unconcern" is the culmination of depressive pain. Every beat is like a scar on a bewailing soul. This is really something a lot oppressive even by the standards of experienced doomsters. The final short instrumental "Madrigal" returns the listener to reality, bestowing the long-awaited catharsis.

Dramatic cover art by Natalie Arakelyan and minimalistic booklet design (Tigran Aghajanyan) contribute to the perception of the album as an alarming and serious opus. Among the invited musicians there are also noted: Miga (classic guitar), Anna Oganesyan and Artak Karapetyan (extra vocals). The mixing was done by Artak Karapetyan.

According to the author he drew inspiration from such projects as Lustmord, Dargaard, Colosseum, Thergothon, Evoken, Bohren & der Club of Gore, Grief, Winter, Dead Can Dance. And this is definitely confirmed when listening to four tracks. The work is very serious and will be useful not only for connoisseurs of the genre. It would benefit touching "Act I: The Protagonist" for anyone who is in a search of his inner self. Where there is the first act is should the second follow? I will look forward to continuing.